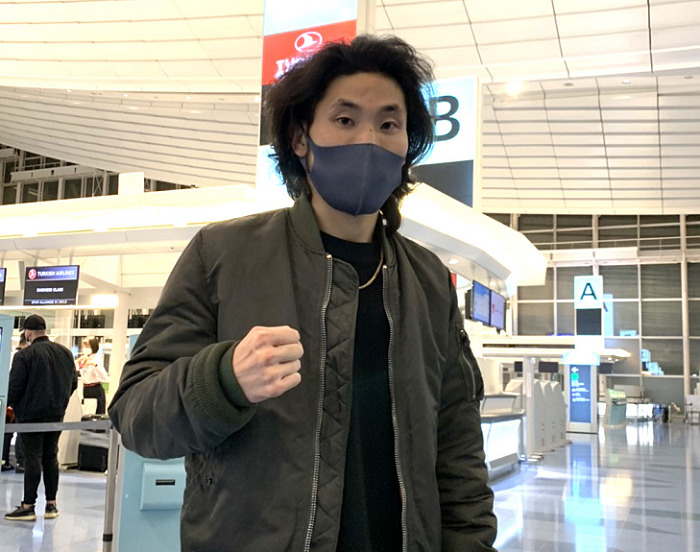 Since the 26-year-old Akhmadaliev, undefeated in his eight professional bouts, including six knockouts, is also the World Boxing Association ‘’super’’ champion in that weight division, if Iwasa wins the fight, he will also capture the WBA crown as well. Left-handed Akhmadaliev was the bronze medalist at the 2016 Rio de Janeiro Olympics in Brazil.

Before his departure from Tokyo’s Haneda airport, Iwasa said ‘’I am determined to return home with the two championship belts by winning the fight in Uzbekistan on Apr. 3.’’

It will be the 31-year-old Iwasa’s first bout since he won the title with a technical knockout over Marlon Tapales of the Philippines in the United States in December 2019.
Iwasa, also a southpaw, has a 27-3 win-loss record with 17 KOs.

Shoji Kobayashi, head of the gym, said, ‘’while Iwasa used to become nervous before a fight, he looked relaxed this time during the last-minute training in Japan. This is because he had fought twice overseas, which counts for a great deal.’’

In Tashkent, Iwasa is expected to remain at a hotel without going out just like when he won the interim title in Los Angeles. The team Iwasa will also be careful about measures against novel coronavirus pandemic. Photo by Celes Boxing Gym