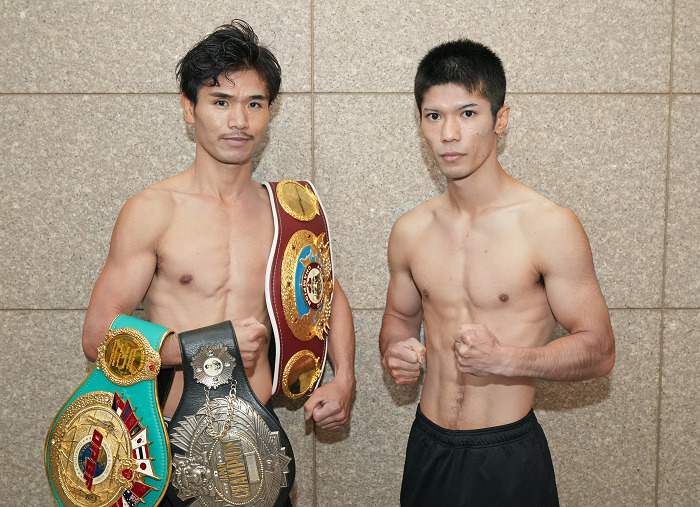 Both boxers cleared the weigh-ins within the division’s weight limit of 52.16 kg (115 lbs) on Oct. 1. The scheduled 12-rounder will be held at Korakuen Hall.

The 35-year-old Fukunaga first won the WBO title by stopping Froilan Saludar of the Philippines in February last year and added the OPBF title, which was vacant at that time, and the Japanese crown with a technical knockout over Japanese champion Kenta Nakagawa of Misako Boxing Gym in December that year.

While the southpaw Fukunaga successfully defended his WBO and Japanese titles in June this year by stopping Takahiro Fujii of Kaneko Boxing Gym in the eighth round, this is the first time for him to put all the three titles on the line.

Fukunaga, nicknamed ‘’the Japanese (Manny) Pacquiao’’ because of his fighting style, named Kaji as his next opponent on his own will since the undefeated 24-year-old challenger, ranked third in the Japanese division, is widely regarded as the most promising up-and-coming boxer in this weight division.

Since Fukunaga is currently ranked seventh by the WBO and eighth by the International Boxing Federation in their world rankings respectively, he said, ‘’If I beat Mr. Kaji, I think I can say I am qualified for taking a crack at a world title,’’ thereby virtually regarding the fight as the final barrier for his world title challenge.

‘’In the final analysis, I want to knock him out,’’ Fukunaga added.

Meanwhile, Kaji said, ‘’Though Mr. Fukunaga is a southpaw, his has an aggressive fighting style as he mostly comes forward. I have to be careful about his straight lefts and right hooks. If I can stick to my fighting style, I think I can beat him.’’

Fukunaga has a record of 14 wins, all by knockout, against four losses, while Kaji has 15 straight wins, nine by KO.  Photo by Teiken gym