Home > English > Champion Ioka shows training online for his Dec. 31 title defense, says ‘I will hit him without being hit’
English

Champion Ioka shows training online for his Dec. 31 title defense, says ‘I will hit him without being hit’

World Boxing Organization super flyweight champion Kazuto Ioka of Shisei Boxing Gym displayed a light training online to the press on Dec. 23 in preparation for his defense of the title against sixth-ranked Ryoji Fukunaga of Kadoebi Boxing Gym on New Year’s Eve in Tokyo. 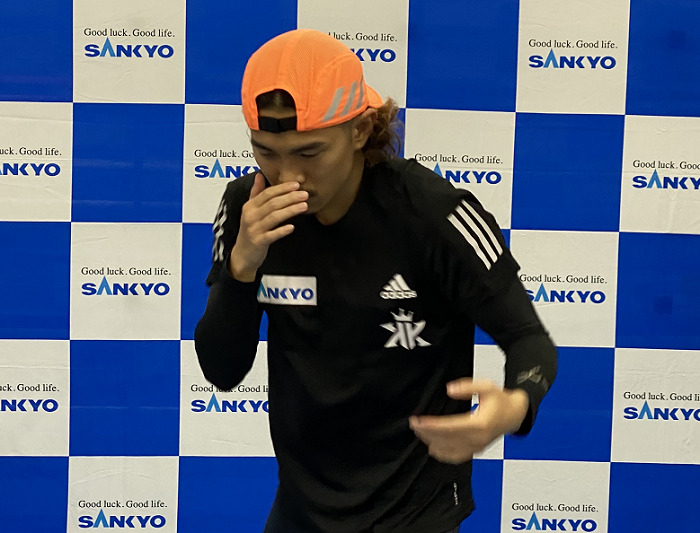 The scheduled 12-round fight will be held at the Ota City General Gymnasium following the cancellation of the initially planned title unification bout with International Boxing Federation’s champion Jerwin Ancajas of the Philippines due to the Japanese government’s restrictions on entry into Japan by foreign residents in response to the spread of the Omicron variant.

The 32-year-old Ioka, who had already completed his last sparring sessions, said before the training he is now in the final adjustment stage with his weight being a little less than 4 kgs (8.82 lbs.) above the division’s weight limit of 52.16 kg (115 lbs.), adding, ‘’I am progressing steadily (for the fight).’’

Commenting on his let-handed opponent Fukunaga, who is nicknamed ‘’Little (Manny) Pacquiao’’ because of his similar fighting style and boasts 14 knockouts out of the 15 wins (against four losses), Ioka said, ‘’I will try to do my style of boxing and hit him without being hit.’’

Asked about the 35-year-old Fukunaga’s determination that he will stake his like on the fight, Ioka said, ‘’Yes, he has a strong feeling about the fight. But I also want to show my spirit of coping with that.’’
Ioka, who is making his fourth defense of the title he captured in June 2019, even showed his careful shadowboxing and stretch training online to the press.

Unlike Ioka’s previous fight on Sept. 1 against Francisco Rodriguez Jr. of Mexico, in which Ioka struggled to a close but unanimous decision win, spectators can come to see the fight this time with the tickets for the fight being sold. Ioka, who has a record of 27 wins, including 15 knockouts, against two losses, said he likes a fight among spectators. Photo by Shisei Boxing Gym