Former Oriental and Pacific Boxing Federation middleweight champion Koki Taison of Banryu Boxing Gym knocked out Natthawut Masamin of Thailand in the third round to earn a victory for the first time in nearly four years in an eight-round nontitle fight on Nov. 30 in Tokyo.

Fighting at Korakuen Hall, Taison, whose real name is Koki Osugi, decked his opponent for the count in the third round with a left hook to the body.

With the victory, Taison improved his record to 15 wins, including 13 KOs, against five losses and three draws. Natthawut fell to a 9-7 win-loss tally with seven KOs. 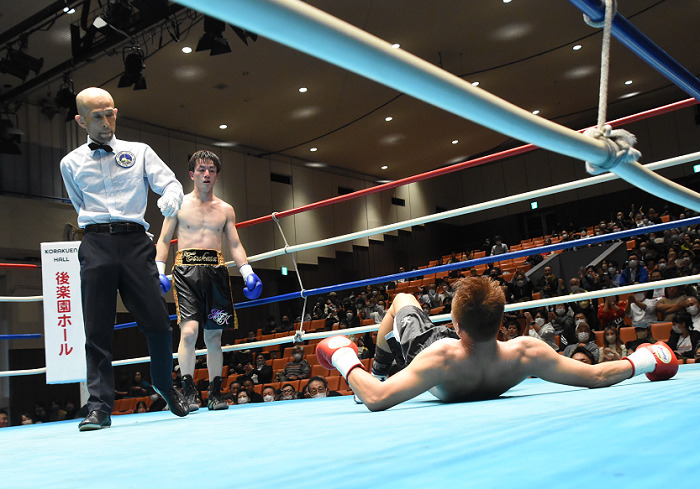 Meanwhile, former World Boxing Council world lightweight youth champion Tsukasa Saito of Ichiriki Boxing Gym earned a victory for the first time in about seven years by stopping Anucha Tongbau of Thailand in the third round of a scheduled six-round bout. It was held as one of the supporting cards of the day’s event.

The 32-year-old Saito last won in December 2015 by stopping Anucha’s compatriot Taengthong Sithsaithong. It was also Saito’s first fight since then. He was absent due chiefly to contractual troubles with his former gym.

With the win, Saito upped his record to 22 wins, including 17 KOs, against three defeats. The 36-year-old Anucha fell to a 3-2 win-loss tally with three KOs.