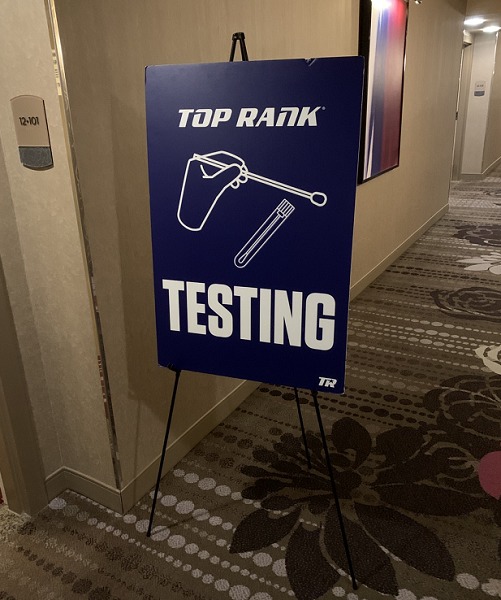 The 27-year-old Inoue, who entered Las Vegas on Oct. 18 and was training mostly at Top Rank Gym until Oct. 26, wound up his training on the following day and moved from a nearby hotel to the MGM’s bubble, a special place equipped with a boxing ring and rooms for sleeping.

According to the Top Rank rule, all the boxers concerned must be isolated four days before their bouts. Before being isolated, Inoue made the comment to the effect ‘’While my atmosphere will change by changing the hotels, I will try to make myself as comfortable as possible at the bubble.

Inoue got together with his Ohashi Boxing Gym friend and top-ranked Japanese super lightweight Andy Justice Hiraoka, who will fight on one of the undercards on Oct. 31. They and their cornermen all took PCR tests to check the novel coronavirus. They are not allowed to leave their respective hotel rooms unless they test negative the following morning.

Besides the boxers and staff concerned, other Ohashi gym trainers and related persons cannot enter the bubble and will have to settle for watching the Oct. 31 fights on TV.

Inoue met MGM Resorts International President William Hornbuckle for the purpose of promoting the upcoming fight before being completely isolated.

The scheduled 12-rounder with the 29-year-old Moloney and other undercard matches at the MGM Grand Conference Center, part of the bubble, will be held behind closed doors to avoid COVID-19.

Inoue is undefeated in his 19 bouts, including 16 knockouts, while the 29-year-old Moloney, who hails from Mitcham near Melbourne, Victoria, has a 21-1 win-loss record with 18 KOs. He is currently ranked second by the WBA and fourth by the IBF. He is also ranked top by the World Boxing Organization.