Top-ranked World Boxing Organization flyweight Giemel Magramo of the Philippines tipped the scales at 50.6 kg (111.5 lbs) while third-ranked Junto Nakatani of M.T Boxing Gym weighed in at 50.7 kg (111.75 lbs), both clearing the 50.8 kg (112-lbs) flyweight limit at the official weigh-ins on Nov. 5 for the vacant WBO flyweight title match to be held the next day at Tokyo’s Korakuen Hall. 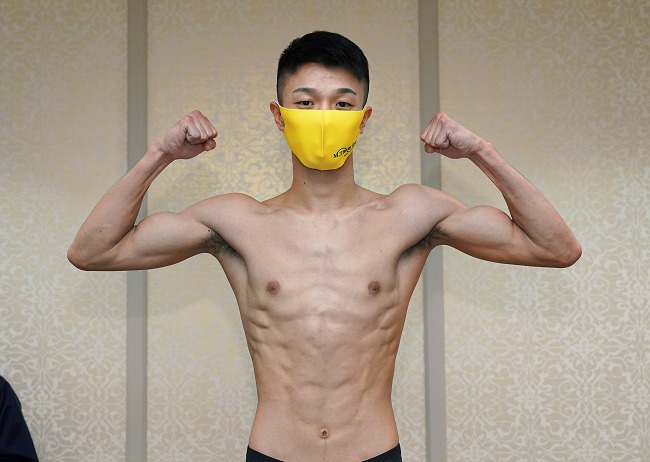 Both fighters tested negative in PCR tests for the novel coronavirus conducted on Nov. 4. No customary prefight public press conference nor a photo session took place in order to avoid COVID-19. Only Japan Boxing Commission officials and officials from both sides attended the weigh-ins.

This is because the World Boxing Association light flyweight title fight between super champion Hiroto Kyoguchi of Watanabe Boxing Gym and a Thai challenger scheduled for Nov. 3 in Osaka was cancelled, one day before the fight as Kyoguchi and his chief trainer tested positive in PCR tests.

Therefore, the upcoming flyweight title match, postponed twice due to the coronavirus pandemic, will become the first men’s world title fight in Japan this year since the start of the COVID-19 pandemic earlier this year.

But responding to a press conference held online, the 22-year-old Nakatani said, ‘’Now that I can have a fight. I want to bring bright news to Japanese fans. I have been engaged in boxing for 10 years and seven months, I will make my dream come true by putting up a kind of fight in which my fans can feel my emotion.’’

Southpaw Nakatani, who stands 171 centimeters, is undefeated in his 20 bouts, including 15 knockouts.
For his part, Magram, who has a 24-1 win-loss record with 20 KOs, did not respond to the online interview and left the message to the effect that he has been fine ever since entering Japan and is confident that he can knock out Nakatani though he is tall.

The scheduled 12-rounder will not be held completely behind closed doors. But no ticket sales for the fight will be made, according to organizing sources. Photos by Teiken Promotion