Undefeated challenger Masahiro Suzuki of Kadoebi Boxing Gym, unleashing a barrage of left-right combinations to the head and body, stopped Daishi Nagata of Misako Boxing Gym in the 10th and final round to capture the Japanese super lightweight title on June 10 at Tokyo’s Korakuen Hall. 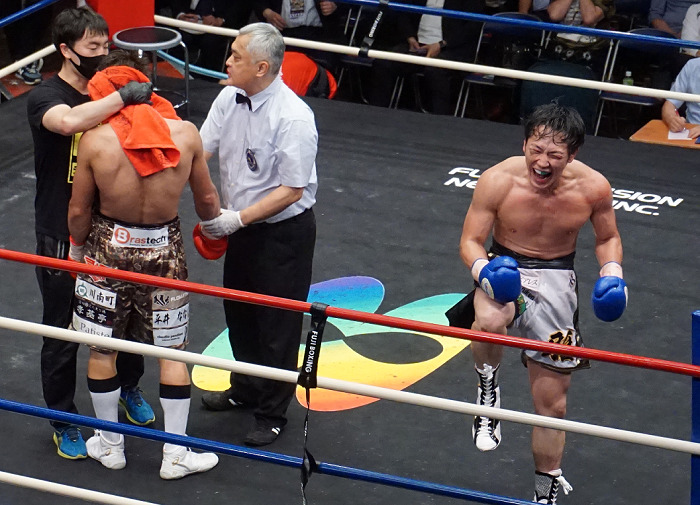 The technical knockout came 2 minutes and 9 seconds into the round when the fifth-ranked Suzuki severely staggered Nagata with a devastating straight right, prompting Nagata’s second to enter the ring to retire the fight.

Suzuki, who had fought 90 amateur bouts before turning pro in November 2018, extended his unbeaten streak to six, including four KOs.

With the defeat, the 31-year-old Nagata failed in his second defense of the title he won from Koki Inoue of Ohashi Boxing Gym, a cousin of Naoya ‘’Monster’’ Inoue, in July last year. Nagata successfully defended his title last December with a technical draw with Akihiro Kondo of Ichiriki Boxing Gym.

While southpaw Nagata started out strongly at a close range with his tight guard, the 25-year-old Suzuki appeared nothing daunted and landed accurate straight rights and left hooks to Nagata.

Suzuki was far ahead on points after the fifth round on three judges’ scorecards. But he was forced to be momentarily wobbly in the seventh stanza with Nagata’s body blows. Suzuki, however, hung tough and increased his offense in the ninth and the 10th rounds. With the loss, Nagata dropped to a 15-3-2 win-loss-draw tally with six KOs.