World Boxing Association ‘’super’’ and International Boxing Federation bantamweight champion Naoya ‘’Monster’’ Inoue of Ohashi Boxing Gym arrived in Las Vegas, Nevada, on June 9 (June 10 Japan time) for his mandatory title defense against the IBF’s No.1-ranked Michael Dasmarinas of the Philippines at The Theater of Virgin Hotels Las Vegas on June 19 (June 20 Japan time), Ohashi gym said on June 10.
It will be the 28-year-old Inoue’s third defense of the IBF title he captured in May 2019 and his fifth of the WBA crown he won in May 2018. 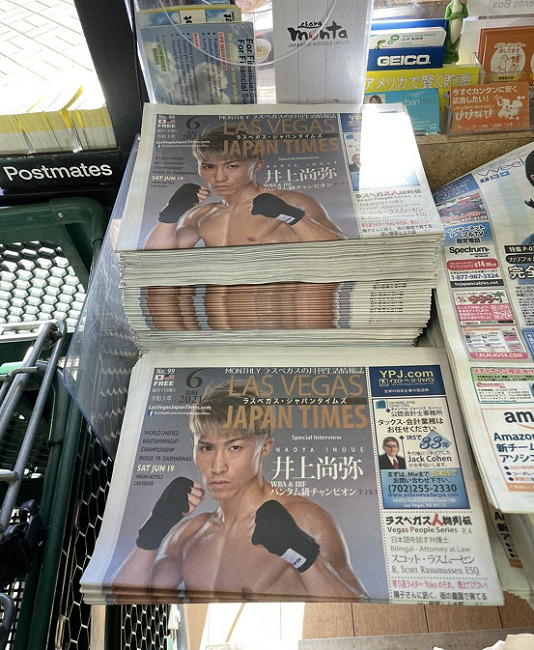 Local paper Las Vegas Japan Times aimed at Japanese staying there carried feature articles, including an interview with the undefeated Inoue, in a few pages with his big picture on the front page. The poster of the fight is also placed on the back page.

By the same token, Top Rank Inc., a major U.S. boxing promotional company, reported breaking news on Inoue’s entry into Las Vegas via its social networking service, including the pictures of Inoue’s departure from Tokyo and his arrival in the U.S.

Inoue was accompanied by his father and trainer Shingo, his brother and former WBC bantamweight interim champion Takuma and his cousin Koki, a former Japanese and World Boxing Organization Asia-Pacific super lightweight champion.

This will be the second time for Inoue to fight in Las Vegas following his successful title defense against Jason Moloney of Australia last October, which was held behind closed doors.

This time, the scheduled 12-round title fight will be held with spectators allowed in.

Inoue has 20 straight wins, including 17 knockouts, while southpaw Dasmarinas, also 28, has a 30-2-1 win-loss-draw record with 20 KOs. Photo by Ohashi Boxing Gym