Murata, GGG to face in title unification match on Dec. 29 in Saitama Pref. 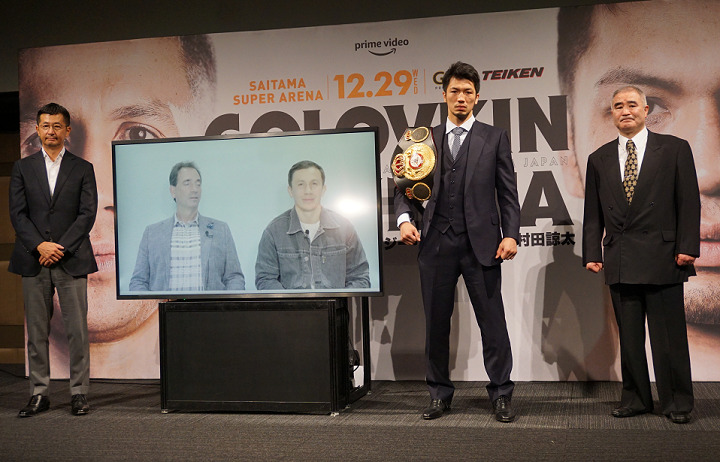 The scheduled 12-rounder will be televised live by Amazon Prime Video, a subscription video on-demand over-the-top streaming held by Amazon Inc. of the United States.

According to Teiken President Akihiko Honda, the aggregate total of their purses will reach the maximum amount in the history of the Japanese boxing. This is the first time that a middleweight title unification match has been held in Japan since middleweight is one of the world’s most popular weight divisions,

It will be the 35-year-old Murata’s first bout in two years and his second title defense after winning back the WBA title from Rob Brant of the U.S. in July 2019 with a technical knockout.

The 39-year-old Golovkin, popularly known as his nickname GGG, also appeared at the conference remotely from the U.S. State of Florida together with Tom Loeffler of GGG Promotions.

For his part, Golovkin said via remote, ‘’I am looking forward to fighting in Japan for the first time because it is Mr. Murata’s home country. Our long-standing negotiations have finally materialized. I am glad I can draw level with Mike Tyson and other great foreign boxers (who have fought in Japan).’’

For his part, Golovkin, the middleweight silver medalist at 2004 Athena Olympics, has a 41-1-1 win-loss-draw tally with 36 KOs. After making a professional debut in 2006, GGG captured the WBA middleweight title in 2010 and successfully defended the title for 19 times. He later won the World Boxing Council middleweight and IBF middleweight crowns, successfully defending the titles for eight and four times, respectively. He was later deprived of the IBF title for not fighting against a designated challenger.

He lost the WBA and WBC titles to Saul Alvarez of Mexico in September 2018 via a majority decision. GGG, however, captured vacant IBF middleweight crown in October 2019 and successfully defended the title last December.