The World Boxing Organization super flyweight title match between champion Kazuto Ioka of Ambition GYM and undefeated Kosei Tanaka of Hatanaka Boxing Gym on Dec. 31at Ota City General Gymnasium in Tokyo was selected as the best bout held in Japan in 2020, in which Ioka stopped Tanaka in the eighth round with masterful left hooks. 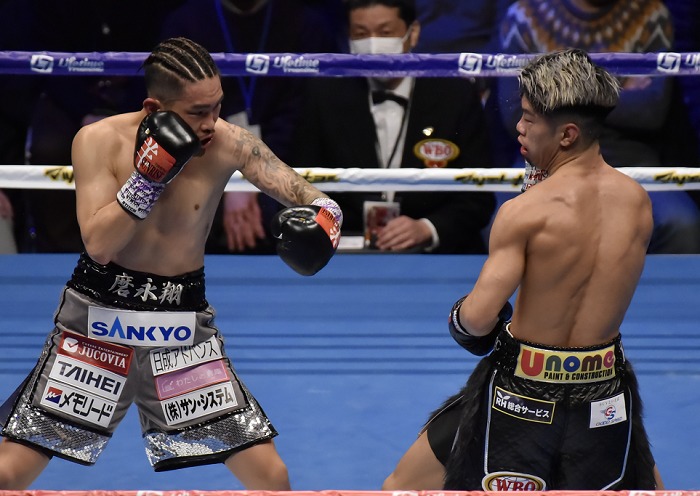 The bout, billed as the best championship bout in history, as the 31-year-old Ioka, the only Japanese to have conquered boxing’s four different divisions, and the 25-year-old Tanaka, who had won WBO minimumweight, light flyweight and flyweight crowns, clashed head-on from the opening bell.

This is the second time Ioka has obtained the best bout award since he decisioned Akira Yaegashi of Ohashi Boxing Gym, in 2012.

Although Ioka showed ‘’the difference of class’ by flooring the challenger with well-timed left hooks, Tanaka did not lose his fighting spirit until the final moment.

The bout got 25 votes from the mass media, followed by 10 votes for Naoya ‘’Monster’’ Inoue’s seventh-round stoppage over Jason Moloney of Australia last October in Las Vegas, Nevada, and one vote Junto Nakatani’s eighth-round KO of Giemel Magramo of the Philippines in Tokyo for the vacant WBO flyweight title in November. Nakatani belongs to M. T Boxing Gym.

The honorable mention-fighting spirit award was shared by Kenichi Horikawa of Misako Boxing Gym, who captured the Oriental and Pacific Boxing Federation light flyweight title at the age of 40, and Ryoji Fukunaga of Kadoebi Boxing Gym who obtained the Japanese, OPBF and WBO’s Asia-Pacific crowns.

As for the best bout award besides world championships, the vacant WBO inter-continental lightweight championship fight between Masayoshi Nakatani of Teiken Gym and Felix Verdejo of Puerto Rico held in December in Las Vegas was chosen as Nakatani, severely floored twice earlier in the fight, came from behind to stop Verdejo in the ninth round in a dramatic fashion.

As for female boxing, southpaw Etsuko Tada of Shinsei Boxing Gym received MVP. It was the 39-year-old Tada’s second MVP in 11 years.

Tada and the 37-year-old Ayaka Miyao of Watanabe gym received the best female bout of the year award as Tada stopped Miyao with a beautiful left counter in the ninth round to capture the vacant WBO world female minimumweight title in December at Tokyo’s Korakuen Hall.