Highly touted former amateur star Kenji Fujita of Teiken Boxing Gym made a professional debut as he stopped Motosuke Kimura of JM Kakogawa Boxing Gym in the sixth and final round in a featherweight match on March 25 at Tokyo’s Korakuen Hall. 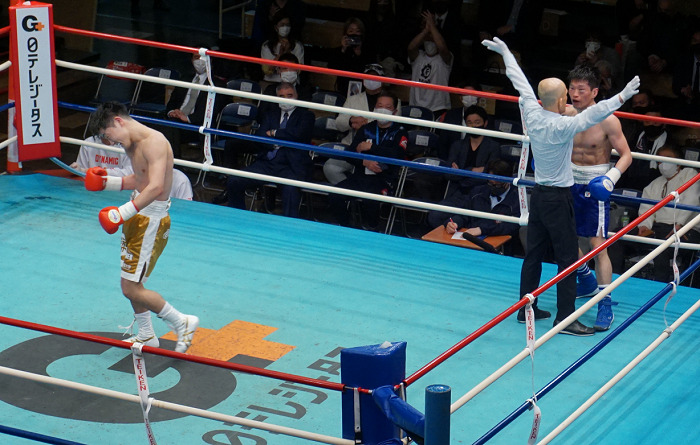 The technical knockout came 2 minutes and 38 seconds into the round when switch-hitting Kimura, whose left eye was swollen due to Fujita’s punches, was shaken severely by southpaw Fujita’s accurate shots to the body and head with about 30 seconds left, prompting the referee to step in to call a halt to the bout.

The 27-year-old Fujita, who had a total of 10 major amateur titles with a record of 153 wins against 21 losses, scored a knockdown with right-left combinations in the fourth round for a mandatory eight count.

Fujita told reporters, ‘’It was good because I was able to maintain my calmness and pace. I noticed my opponent began to be tired from around the fourth round. I would say I will give 60 points (out of 100 points) to my fight today. I want to do as many fights as possible from now on.’’

With the loss, Kimura saw his record fall to three wins, including one KO, six defeats and two draws.