Undefeated World Boxing Organization flyweight champion Junto Nakatani of M.T Boxing Gym, landing his favorite straight lefts almost at will, stopped top-ranked challenger Angel Acosta of Puerto Rico in the fourth round to retain the title for the first time on Sept. 10 (11 Japan time) in Tucson in the State of Arizona, southeastern part of the U.S. 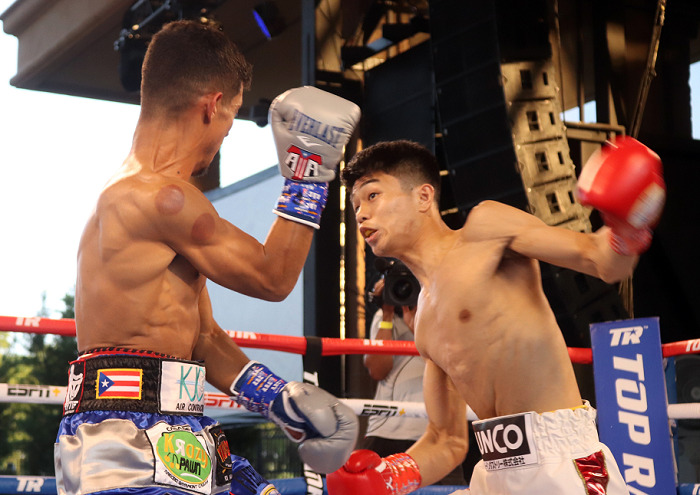 The technical knockout at Casino del Sol came 32 seconds into the round of the scheduled 12-rounder when the referee waved off the fight as the 30-year-old Acosta bled profusely from his nose damaged by southpaw Nakatani’s punches. The referee had had a ringside doctor check Acosta’s nose a few times in the preceding rounds. Acosta might have suffered a broken nose, according to boxing sources.

Nakatani got off to a good start by landing straight lefts to the head, causing Acosta to bleed from his nose, and did not let up on his offense as he landed body shots at close range followed by a barrage of hooks to the head.

Nakatani, who captured the then vacant title by knocking out Giemel Magramo of the Philippines in the eighth round last November in Tokyo, stepped up his pace after the ringside doctor checked Acosta’s nose in the second round.

The best moment of Acosta, a former WBO light flyweight kingpin, came before the end of the second round as he landed an overhand right to the head. But that was the only moment Acosta was active in the fight.

Nakatani told a television interview after the fight, ‘’I was able to hit him in the nose with a good timing in the first round, which set the stage for me to land more punches. I felt his nose might have been broken in the first round. I am glad fans (at the venue) were excited by my boxing. I want to have title unification fights in the future.’’  Photo by SUMIO YAMADA