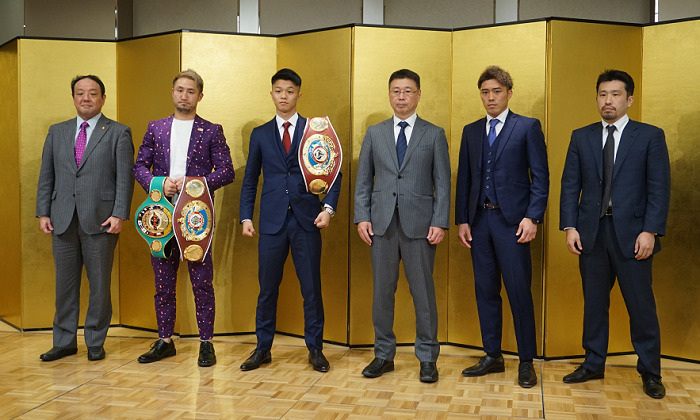 According to the organizers, the 23-year-old Nakatani will take on the ninth-ranked Cristian Gonzalez of Mexico and said at the press conference, ‘’I am honored to fight before the big fight. I hope I can enhance the mood for the Mr. Murata-Golovkin fight by winning my fight in an impressive way.’’

He appreciated a three-month hiatus between his first defense against Angel Acosta of Puerto Rico, whom Nakatani stopped in the fourth round, because it is an ideal interval for him.
Gonzalez, 22, has a record of 14 wins, including four knockouts, against a loss. This will be his first crack at a world title.

Southpaw Nakatani, 23, said, ‘’My opponent this time is very tall, maybe taller than me. What’s expected of me is to knock out my opponent and I want to live up to the expectation.’’ Nakatani has 22 straight wins, including 17 KOs.

By the same token, the WBO’s fifth-ranked contender in the world Shuichiro Yoshino of Misako Boxing Gym will face former WBO super featherweight champion Masayuki Ito of Yokohama Hikari Boxing Gym in one of the undercards of the Murata-Golovkin showdown.

The undefeated Yoshino will put two of the three titles he has, the Oriental Pacific Boxing Federation lightweight and WBO Asia-Pacific lightweight crowns, on the line. His Japanese lightweight title will not be at stake, the organizers said.

The two fighters, both 30-years-old, consider the upcoming fight in their quest for an eventual world title challenge. Yoshino has a record of 14 straight wins, including 11 KOs, while Ito has a 27-3-1 win-loss-draw tally with 15 KOs.