Oriental and Pacific Boxing Federation middleweight champion Kazuto Takesako of World Sports Boxing Gym stopped former OPBF super welterweight kingpin Niwat Kongkan of Thailand in the third round on Sept. 3 in a nontitle fight in Tokyo, winning his first bout in a year and four months. 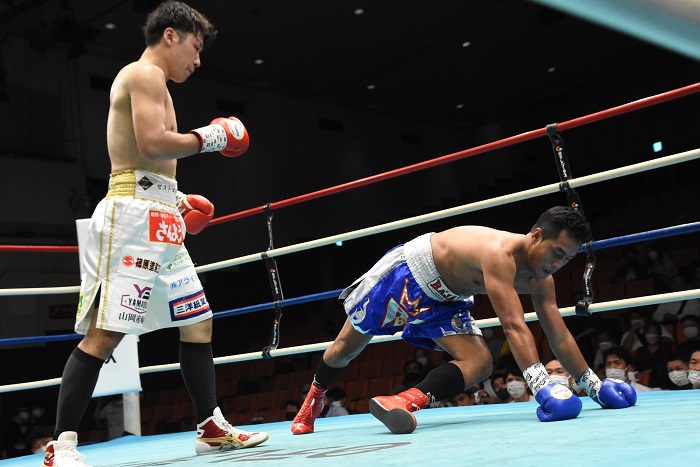 The technical knockout of the scheduled 10-rounder at Korakuen Hall came 1 minute and 57 seconds into the round when Takesako decked Niwat with an overhand right after landing left hooks to the body, prompting the referee to stop the fight.

Takesako also scored two knockdowns in the second round, setting the stage for his onslaught in the third round.

After the fight, the undefeated the 31-year-old Takesako said, ‘’I want to unify the Asian titles within this year, thereby refereeing to the title unification fight with World Boxing Organization’s Asia-Pacific middleweight champion Hiroya Nojima of Yakushiji Boxing and Fitness Gym.

With the victory, Takesako extended his unbeaten streak to 14 wins, including 13 KOs, with one draw. For his part, the 37-year-old Niwat fell to an 11-9 win-loss tally with one no contest, including eight KOs.