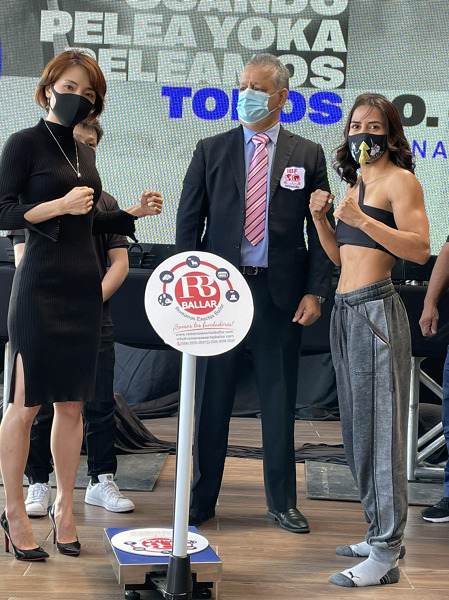 It will be Valle’s second defense of the title she captured in August 2019. She once visited Japan as she lost to Naoko Fujioka (T&H Boxer Fitness Gym) in December 2017 for the World Boxing Organization’s vacant world female light flyweight championship bout at Tokyo’s Korakuen Hall. She has a record of 20 wins, including nine knockouts, against two defeats.

‘’I am very happy that I can finally fight. I am ready to defend my title for my fans in the country. True Sana will desperately try to win the championship belt. But that will not happen,’’ Valle said at a press conference.

Meanwhile, Hazuki, who has an eight-four-one win-loss-draw record with two KOs, won the Oriental and Pacific Boxing Federation minimumweight title in November 2019, which set the stage for her challenge for the world championship bout this time. It will not only be her first world title challenge but also her first fight abroad.

After the weigh-in, Hazuki left a message through the gym as she said, ‘’I felt she (Valle) is serious about the fight (with me) as her smile disappeared. I have been aiming at capturing the title for seven years and will show everything I have in my arsenal.’’

The scheduled 10-round championship bout will be held at the Oxigeno Human Playground in Heredia, the central part of the country, behind closed doors due to the prevention of the possible novel coronavirus infection. Photo by YuKO fitness boxing