‘Monster’ Inoue eagerly wants to have fight this year in Japan 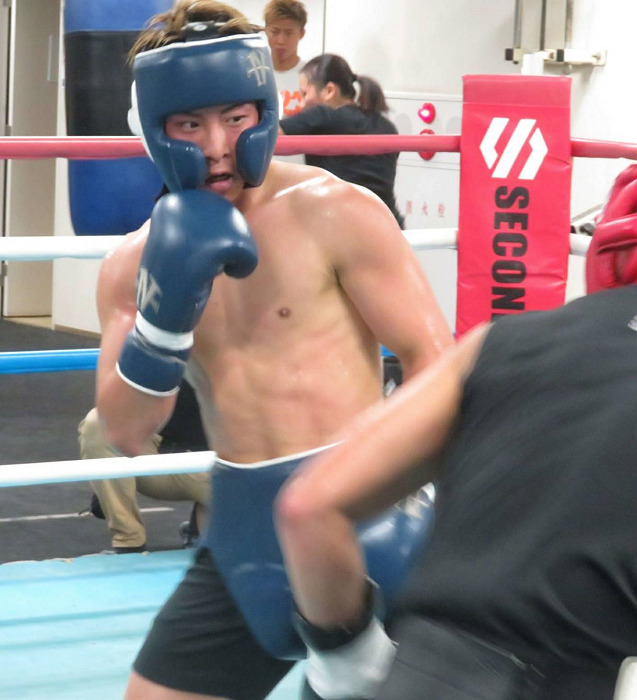 Question: You resumed workout in July. How is your condition?
Answer: I have been doing like before. I started full-fledged sparring sessions this month

Q: You are doing sparring only with orthodox-style partners. Any reason?
A: Yes, basically I have been sparring with orthodox-style partners. But it depends on my next opponent. If he is a southpaw, I will spar with southpaw partners (laugh). I have also been sparring with Hayato Tsutsumi (Toyo University), one of the Tsutsumi amateur boxing brothers. This is to cope with various types of boxers.

Q: What is your plan for the next fight?
A: I have been training so that I can fight within this year in some form.

Q: Do you want to carry out the title unification fights among the four governing bodies as early as possible?
A: Not in particular. I’m not impatient. My fighting weight is bantamweight. It’s my desirable weight.

Q: Have you become more well-muscled?
A: My weight has not changed big. I used to weigh the 62-kg level (137 lb-level). But sometimes I weigh 63 kg. So, within the margin of 1 kg. I normally weigh 62.5 kg at night and 63 kg the following morning. I think the volume of my muscle has been increasing bit by bit because muscle does not increase all of a sudden.

Q: Area you planning to begin efforts to reduce your weight?
A: No. no yet. Instead, I want to get myself into good physical condition through sparring.

Q: You always adjust yourself by setting a final goal and deadline and make a plan to get there in time
A: I would say I am adjusting myself with a fight within this year in mind.

Q: Your next fight may take place in Japan. What do you think?
A: I want to fight in Japan by all means. If I can fight in Japan, it will be my first fight in about two years (since he decisioned Donaire in November 2019).

Q: Tell us about the number of the current sparring sessions?
A: Around two to three times a week. Each time, I have four to five rounds of sparring.

Q: We think you have improved a lot over the past two years. What sort of thing do you want to display in the next fight?
A: I hope my fans to see the fight by all means. I am confident that they will be satisfied if they see it. Please look forward to my fight. Photo by Ohashi Boxing Gym