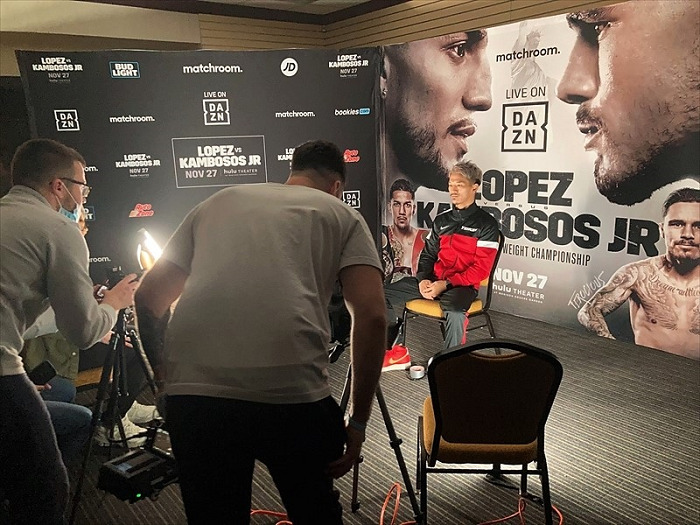 In the morning, Ogawa had a photo session at a New York hotel by DAZN, a global subscription video streaming service entity which will cover the fight. Ogawa said, ‘’ It was a fresh experience for me since professional cameramen created a unique atmosphere. I am looking forward to seeing them.’’ Ogawa also gave an interview to DAZN.

In the afternoon, Ogawa engaged in training at the Gleason’s boxing gym in Brooklyn for about 90 minutes before the public workout. Ogawa said, ‘’I am honored to have been able to practice at the prestigious gym. I was able to practice satisfactorily as I perspired a lot just like yesterday.’’ During the public workout I met Mr. Fuzile for the first time. He gave me a good impression. His face looked smaller, and he is a little shorter than me.’’

‘’I got hyped up by meeting my opponent while getting an image in my mind. As far as I saw Mr. Fuzile’s practice, he does not appear to be much different from the image I had held beforehand. I don’t know his movement during the practice may be different from that during the actual fight, I did not have a bad impression (about him). My weight reduction effort has been better than expected as I was able to eat well at night. In other words, I was in superb shape today, too,’’ he added.

The 33-year-old Ogawa has a record of 25 wins, including 18 knockouts, against a loss and a draw with one no contest. For his part, the 25-year-old Fuzile is a southpaw with a 15-1 win-loss tally with nine KOs. Photo by Teiken Boxing Gym