World Boxing Organization super flyweight champion Kazuto Ioka of Shisei Boxing Gym hammered out a 12-round unanimous decision over sixth-ranked Ryoji Fukunaga of Kadoebi Boxing Gym and retained his title for the fourth time on Dec. 31 in Tokyo. While there were no knockdowns throughout the fight, the 32-year-old Ioka controlled the fight all the way at the Ota City General Gymnasium.

After a quiet start, the left-handed Fukunaga, nicknamed ‘’Little (Manny) Pacquiao’’ because of his similar fighting style to the legendary Filipino boxer, threw his favorite straight lefts to the head. But Ioka did not allow Fukunaga to hit him directly.

From around the fourth round, Ioka, who was fighting his 10th world title fight on New Year’s Eve since making his professional debut in April 2009, showed his mettle by landing left hooks to the head and body and straight rights to the head.

Ioka provoked Fukunaga in the sixth stanza by inviting him with his right hand while landing straight rights to the body and left hooks to the head. Ioka suffered a slight cut below his right eyelid in the round, though. Ioka controlled the seventh and eighth rounds with his accurate punches.

The best moment for Fukunaga came in the ninth round when he moved forward while landing straight lefts to the head and body. Both boxers fought the remaining rounds almost evenly. 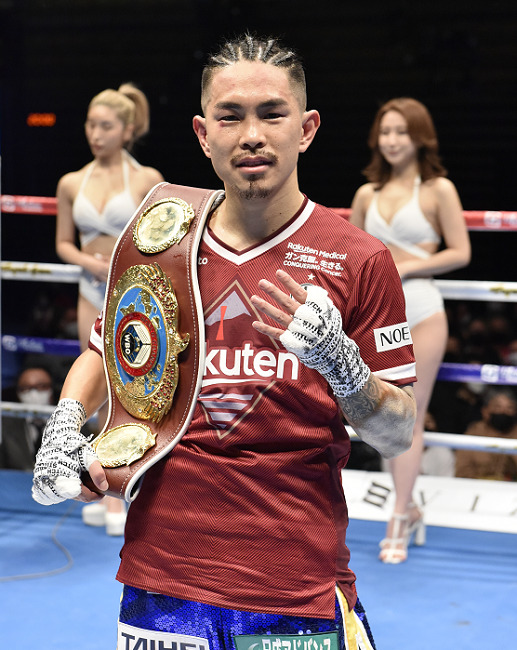 After the fight, Ioka, the only Japanese boxer who has become world champions in four different weight divisions, said from the ring, ‘’It was my 10th world title fight overall and felt emotion welling up. I want to thank the various people for having realized this fight (with Fukunaga). My next aim is to have a title unification fight with (International Boxing Federation’s champion Jerwin) Ancajas (of the Philippines) next year. So, please cheer me up.’’

With the victory, Ioka has a record of 28 wins, including 15 knockouts, against two losses. Fukunaga fell to a 15-5 win-loss tally with 14 KOs.

Ioka’s initially planned fight with Ancajas was cancelled early this month due to the Japanese government’s restrictions on entry into Japan by foreign residents in response to the spread of the Omicron variant.