Former International Boxing Federation super bantamweight champion Yukinori Oguni of Kadoebi Boxing Gym’s return to the ring for the first time in three years ended in a technical draw due to an accidental head-butt with Oriental and Pacific Boxing Federation bantamweight champion Keita Kurihara of Ichiriki Boxing Gym in a 10-round nontitle fight on May 20 at Tokyo’s Korakuen Hall.

The head-butted occurred in the fourth round with Oguni sustaining a severe cut on his right eyebrow. The degree of the cut was such that a referee waved off the fight at the advice of a ringside doctor, and a technical draw was declared since the bout was stopped 2 minutes and 40 seconds into the fourth round.
Up until the stoppage, Oguni, who turned 34 on May 19, was ahead on points on three judges’ scorecards. While there were no knockdowns in the fight, Oguni frequently landed straight rights to the head and body while connecting with left hooks to the body.

With the draw, Oguni has a 21-2-2 win-loss-draw record with eight knockouts, while Kurihara has 16 wins, including 14 KOs, against six losses and a draw. 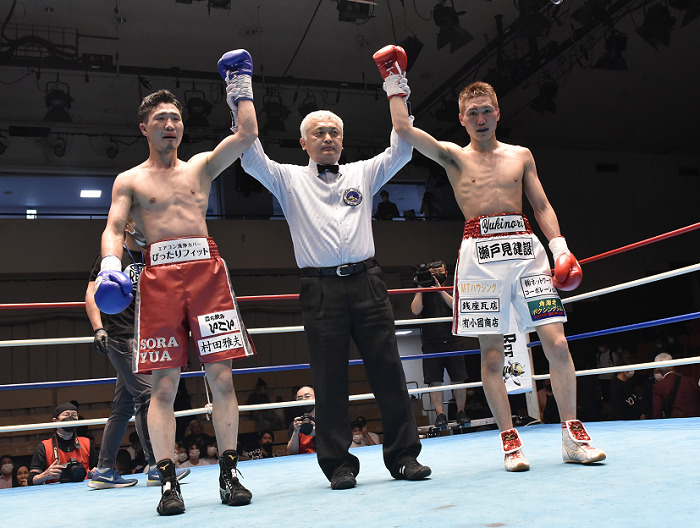 After the fight, Oguni said, ‘’I thought I would quit if I had lost the fight. But since I was not defeated, I would continue.’’ Oguni’s last fight was held on May 8, 2019 at the same place. He won a 10-round unanimous decision over Sukpraserd Ponpitak of Thailand.

Oguni captured the IBF title by decisioning Yonatan Guzman of the Dominican Republic on Dec. 31 of 2016 but lost the title to Ryosuke Iwasa of Celes Boxing Sports Gym with a TKO in his first title defense on Sept. 13 in 2017.