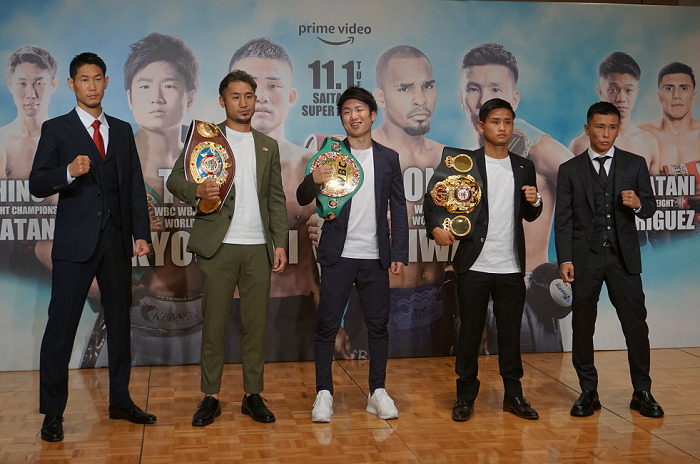 By the same token, World Boxing Organization’s second-ranked light flyweight Shokichi Iwata of Teiken Boxing Gym will challenge champion Jonathan Gonzalez of Puerto Rico for the latter’s title as the chief supporting card at the arena, north of Tokyo, according to the organizers.
These scheduled 12-rounders will be televised live by Amazon Prime Video, they added.

Further, undefeated WBO flyweight champion Junto Nakatani of M.T Boxing Gym will face Francisco Rodriguez Jr of Mexico, currently ranked third in the super flyweight division by the WBO and fourth by the International Boxing Federation, respectively in a 10-round nontitle bout as an undercard.

Also, a 12-round title fight between Oriental and Pacific Boxing Federation lightweight and WBO’s Asia-Pacific lightweight champion Shuichiro Yoshino of Misako Boxing Gym and ninth-ranked WBC lightweight Masayoshi Nakatani of Teiken gym will be included. Only Yoshino’s WBO title will be at stake, they said.

The title unification fight between Teraji and Kyoguchi will be the first fight involving Japanese champions in 10 years since then WBC minimumweight kingpin Kazuto Ioka of then Ioka Boxing Gym and WBA champion of the same division Akira Yaegashi of Ohashi Boxing Gym in June 2012 (in which Ioka won by hard-fought decision).

At a press conference held in Tokyo, Teraji said, ‘’I am happy that I can take part in the main event of the fight of this magnitude. I think I am superior to my opponent in every aspect since I can now fight at short range as well as at long rage.’’

The previously undefeated Teraji suffered a loss for the first time to Masamichi Yabuki of Midori Boxing Gym and lost the title in September last year. Teraji, however, recaptured the title in March this year with a one-punch knockout in their rematch. He has a 19-1 win-loss record with 11 knockouts.

‘’I think this is a kind of match that boxing fans as well as combat sports fans are looking forward to. I am determined to win the fight by living up to the expectations of the fans. I have defended my title twice overseas, which means I am superior to my opponent in terms of experience,’’ Kyoguchi said.

For his part, Teraji said, ‘’I got the impression he (Kyoguchi) does not have much interest in fighting in Japan.’’ Meanwhile, Kyoguchi said, ‘’The main reason I have accepted the fight is my (big) purse.’’
During their amateur days, the 30-year-old Teraji beat the 28-year-old Kyoguchi three out of their four matches.