Lightly regarded Yuichi Ideta of Misako Boxing Gym, unleashing a barrage of punches from various angles, battered champion Makoto Kawasaki of RK Kamata Boxing Family gym into submission in the ninth round and wrested the Japanese super welterweight title in a battle of attrition on Nov. 8 in Tokyo. 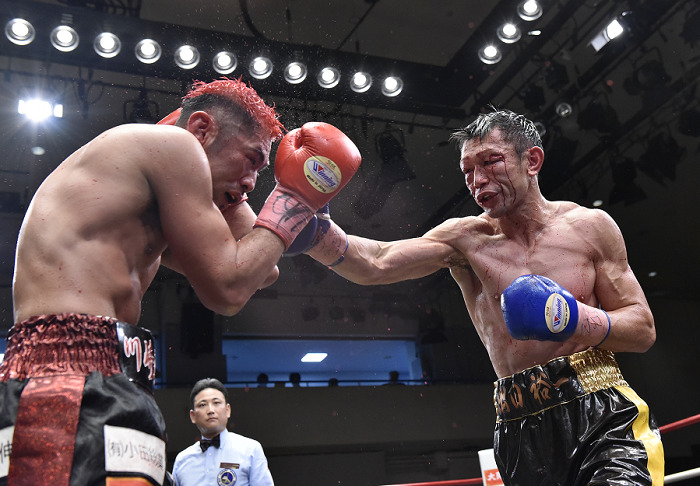 The technical knockout of the scheduled 10-rounder at Koraken Hall came 1 minute and 52 seconds into the round when the referee stopped the fight to save the severely damaged Kawasaki as the blood-soaked Ideta continued his simple but powerful attack.

With the win, the 38-year-old Ideta won the title for the first time during his nearly 18-year professional career. He once suffered 11 straight losses during his long career. Ideta also avenged his loss to Kawasaka, also 38, in April 2019.

With the defeat, Kawasaki failed in his second defense of the title he captured by decisioning Koki Koshikawa of Ichiriki Boxing Gym for the vacant crown in April this year.

Both exchanged fierce blows from the opening round with Ideta suffering a cut above his left eyelid due to an accidental head-butt. He also suffered a cut above his right eyelid in the third round.

They both fought in a similar situation with Ideta slightly getting the better of it. But the accumulated damage began to tell on Kawasaki more.

After Kawasaki moved forward in the seventh round, Ideta struck Kawasaki repeatedly in the eighth round. But Kawasaki’s accumulated damage was such that the referee stepped in to wave off the fight in the ninth round when Ideta was landing unanswered punches in a row.

With the victory, Ideta improved his record to 16 wins, including nine KOs, against 16 losses and a draw. For his part, Kawasaki fell to a 13-9-2 win-loss-draw tally with two KOs.