Sakai, Matsunaga win in ‘Clash of Titans’ event in Mexico

Sixth-ranked Japanese welterweight Shoki Sakai of Yokohama Hikari Boxing Gym, landing a barrage of left jabs and hooks to the head and body, knocked out Dario Ferman of Mexico in the third round of a scheduled 10-round nontitle bout in Puebla, southern Mexico, on Aug. 20 (Aug. 21 Japan time).
The fight was held as the main event dubbed ‘’the Clash of the Titans’’ at the Poliforum Nuva Escocia in Puebla. 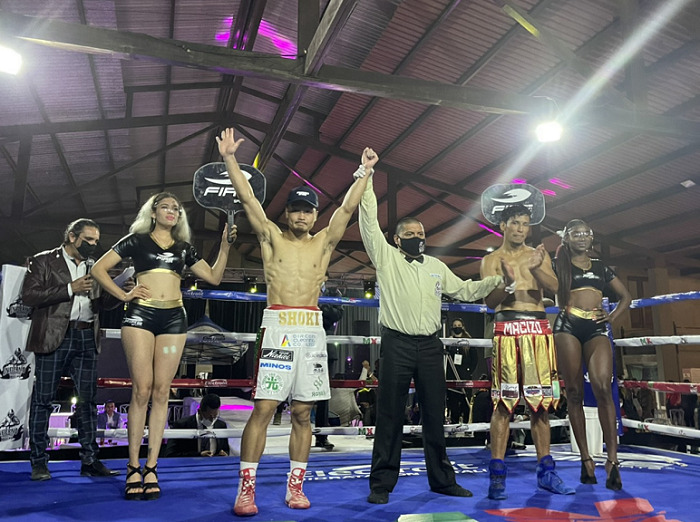 With the victory, the 30-year-old Sakai, who made his professional debut in Mexico and fought mostly in the country until recently, improved his record to 26 wins, including 14 knockouts, against 12 losses and two draws. For his part, the 37-year-old Ferman fell to an 18-10 win-loss tally with 15 KOs.

Another Yokohama Hikari gym boxer and Japanese super welterweight champion Hironobu Matsunaga knocked out Isidro Toala of Mexico in the first round of a scheduled eight-rounder.

The 33-year-old Matsunaga landed an overhand left to the head from his southpaw style, sending the Mexican down backward for the count.

With the victory, Matsunaga upped his record to 19 wins, including 11 KOs, against a loss. Toala dropped to a 12-11-1 record with five KOs.

The event was held as part of the new project launched by A-SIGN Boxing, a crowd-funding promotion entity via YouTube, led by Yokohama Hikari Boxing Gym head Ichitaro Ishii, in cooperation with local MX Promotions.

A-SIGN hopes to further expand its overseas bouts once the ongoing novel coronavirus outbreak is over.