Brandon Mitsuro Tajima of 3150 (Saiko) Fight Club, unleashing a barrage of left and right combinations to third-ranked South Korean heavyweight Kim Sangho soon after the opening bell and stopped the fight in the first round in his professional debut in an eight-round heavyweight nontitle fight on Apr. 29 in Osaka. 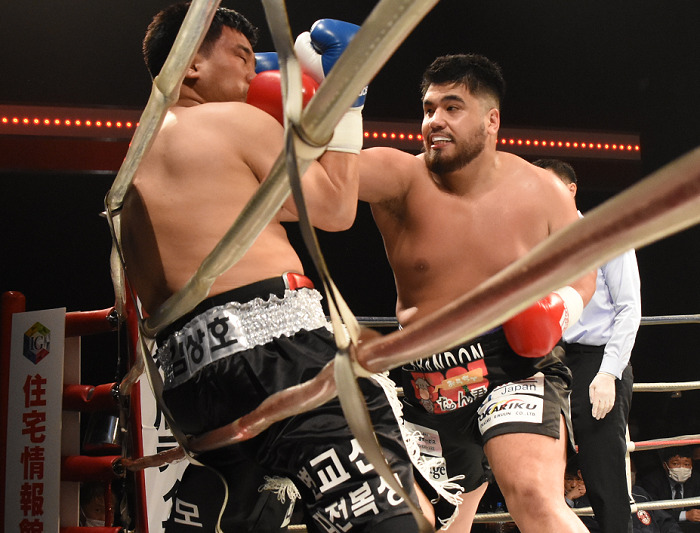 The technical knockout at Mielparque Hall Osaka came 56 seconds into the round when Tajima, who had a 42-9 win-loss record as an amateur, started out fast and landed the rapid left-right blows to southpaw Kim, who was severely staggered, wherein the referee called a halt to the one-sided bout.

The 27-year-old Tajima, who tipped the scales at 123.0 kg (271.25 lbs.), said after the fight, ‘’My debut was delayed by two years due to the COVID-19 confusion and my backache. But I am happy that many people supported me and many fans watched my fight. I know my fighting weight (heavyweight) is not an easy division. But I will continue to fight at heavyweight because I want to become a (world) heavyweight champion and I believe in myself.’’

Tajima was one of the few amateur-turned boxers who made professional debuts with a class-A license.
Saiko club head Koki Kameda said Tajima’s next fight will be scheduled to be held on Aug. 14 at EDION Arena Osaka with the Japanese heavyweight title at stake. With the defeat, the 38-year-old Kim, who weighed in at 94.0 kg, fell to an 8-4-1 win-loss-draw tally with two KOs.

While there were no knockdowns throughout the fight, it was Miyazaki who controlled the fight. In the fifth round, Miyazaki, 33, staggered Sakae, 28, with a well-time left hook to the body followed by a right hook to the head.

‘’I am relieved that I have won the fight. I am thinking about the way I reduce my weight.
Though I could not move well today, I want to do everything I can so that I can win a world title again,’’ said Miyazaki afterward.

With the victory, Miyazaki improved his record to 26 wins, including 16 KOs, against two losses and three draws. For his part, Sakae dropped to a 22-5-1 win-loss-draw tally with 16 KOs.