Yoshiki Takei of Ohashi Boxing Gym, the winner of a former K-1 super bantamweight grand prix, will challenge Oriental Pacific Boxing Federation super bantamweight champion Pete Apolinar of the Philippines for the latter’s title in Tokyo on Aug. 26, Takei told reporters at a press conference held at the gym on June 17. 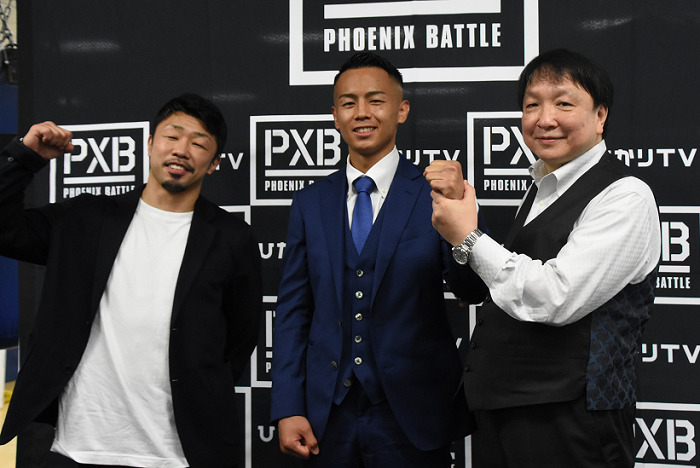 The scheduled 12-rounder will be held at Korakuen Hall. The 25-year-old Takei, who won all of his four bouts with knockout every since making a debut in March last year, said, ‘’I am happy that I can take a crack at a championship fight sooner than expected. I will never miss this opportunity. I like a summer-time fight’’

‘’My opponent has the flexibility and possesses punching power. I will be careful about his punches thrown from various angles. True if I can deck him early in the fight, that is good. But I know it is easier said than done. I am determined to upgrade my boxing techniques and will show everything I have in my arsenals as a combat sports athlete, ‘’ Takei added. Takei needed only one round to knock out his first three foes and two rounds to demolish his most recent opponent in April this year.

Ohashi gym president Hideyuki Ohashi, who was also at the press conference, will serve as a promoter of the fight and said, ‘’The fight will be a ‘risky gamble’ for Takei.’’

The 27-year-old Apolinar, nicknamed Thunder, captured the vacant OPBF title on Apr. 2 by knocking out compatriot Jhunriel Ramonal in the 10th round. He has a record of 16 wins, including 10 KOs, against two losses.

Apolinar served as one of the sparring partners for Naoya ‘’The Monster’’ Inoue of the Ohashi gym for his title unification fight with Nonito Donaire of the Philippines, the then World Boxing Council bantamweight champion, in which Inoue demolished Donaire in the second round on June 7 to add his title in addition to his World Boxing Association ‘’super’’ and International Boxing Federation bantamweight crowns.