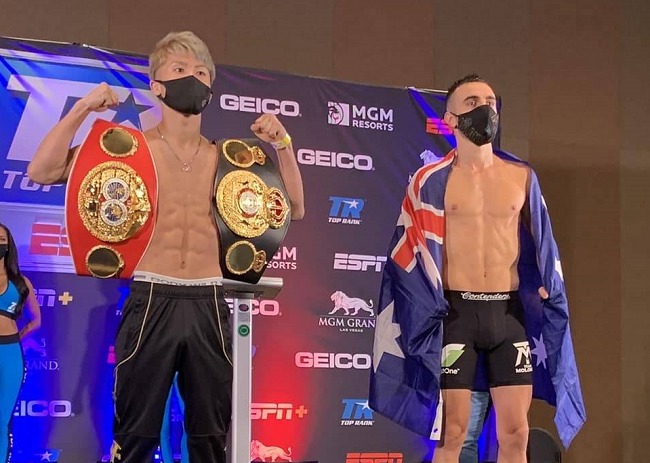 After clearing the weigh-ins, both squared off with each other by wearing face masks for some 15 seconds with only about 10 centimeters apart. Officials then stepped in to separate them.

Inoue, who is fighting for the first time since decisioning Nonito Donaire of the Philippines in the World Boxing Super Series bantamweight final in November last year, is undefeated in his 19 bouts, including 16 knockouts.

For his part, Moloney, who hails from Mitcham near Melbourne, Victoria, has a 21-1 win-loss record with 18 KOs. He is currently ranked second by the WBA and fourth by the IBF. Moloney is also ranked first by the World Boxing Organization.

Meanwhile, top-ranked Japanese super lightweight Andy Justice Hiraoka, who will fight on one of the undercards against American Rickey Edwards, weighed in at 140.9 lbs. (63.91 kg).

It will be Hiraoka’s second appearance in Las Vegas. He has 15 straight wins, including 10 KOs. Both Inoue and Hiraoka belong to Ohashi Boxing Gym in Yokohama, southwest of Tokyo.

The scheduled 12-rounder between Inoue and Moloney and other undercard matches at the MGM Grand Conference Center, part of the ‘’bubble,’’ will be held behind closed doors to avoid the novel coronavirus or COVID-19.