Undefeated Kazuto Takesako of World Sports Boxing Gym, opening up with devastating combinations, knocked out top-ranked challenger Riku Kunimoto of Muto Boxing Gym in the first round to retain his Japanese middleweight title for the fourth time at Tokyo’s Korakuen Hall on May 19. 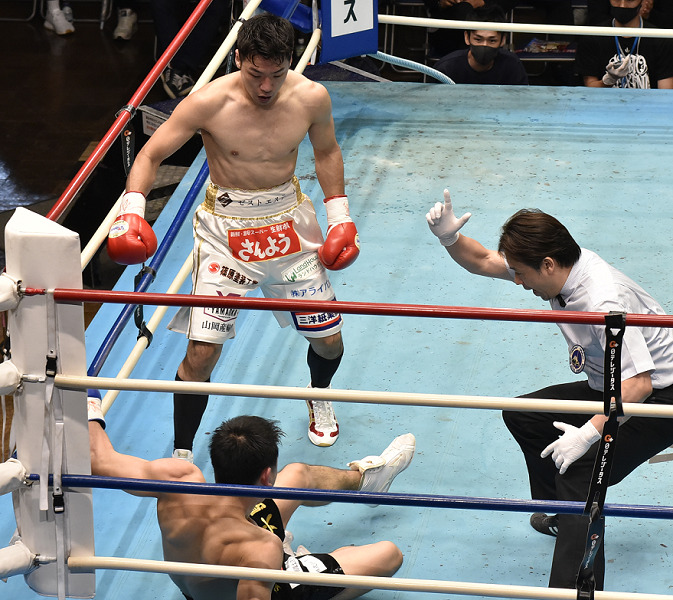 The end of the scheduled 10-rounder came 2 minutes and 46 seconds into the opening round when the 29-year-old Takesako floored the challenger with his right-left-right combination blows to the head, sending his 23-year-old opponent to the canvas for the second knockdown in the round.

While Kunimoto struggled to his feet, the referee counted him out considering his damage. Shortly after the opening bell for the first round, Takesako knocked down Kunimoto with a left hook to the head for a mandatory eight count.

With the victory, Takesako extended his unbeaten log to 13, including 12 KOs, and a draw, while Kunimoto, a former amateur boxer at Osaka University of Commerce, fell to a 4-1 win-loss record with two KOs. It was Kunimoto’s first bout in 2 years and one month.

The fight was postponed as many as four times due partly to the COVID-19 confusion, Takesako’s shoulder injury, etc.

It was Takesako’s first fight since winning the Oriental Pacific Boxing Federation middleweight crown from Shinobu Charlie Hosokawa of Kaneko Gym with a 12-round decision in January last year. The OPBF title was not at stake this time.

After the fight, Takesako said his father Kazuyoshi died of the novel coronavirus infection on May 8 after struggling against the coronavirus.