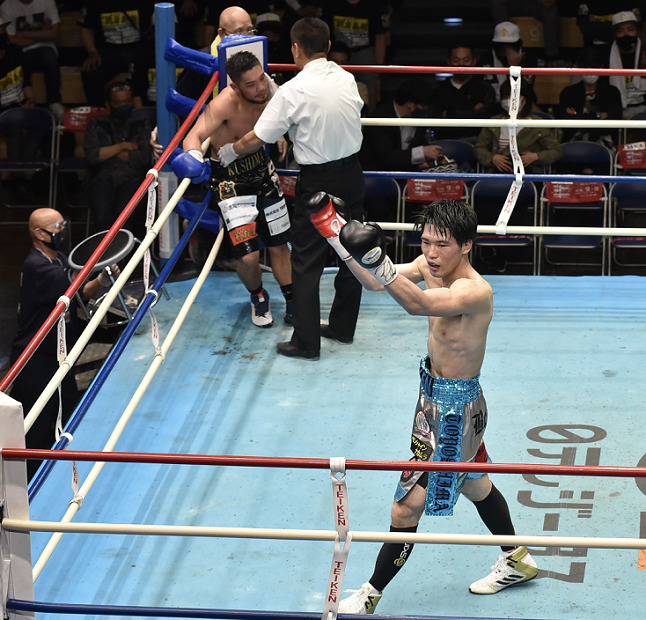 It was Toyoshima’s first successful defense of the title he won from the now-retired Riku Nagahama of Kadoebi Boxing Gym last January. For his part, Beppu failed in his first defense of the crown he won by stopping Ryota Yada of Green Tsuda Boxing Gym in December 2019.

The end of the scheduled 12-rounder came 2 minutes and 59 seconds into the round when the 25-year-old Toyoshima connected with a straight right and a left hook to the head, sending Beppu to the canvas. While the 30-year-old Beppu wobbled to his feet, the referee counted him out.

Toyoshima, keeping his guard high, stalked his shorter but speedy opponent from the opening bell and floored Beppu in the seventh round with a right uppercut. But the game Beppu stood up to beat the referee’s count. He suffered a cut under his left eye.

With the victory, Toyoshima improved his record to 14 wins, including nine KOs, against two defeats and a draw, while Beppu, the WBO’s 12th-ranked contender, fell to a 21-2-1 win-loss-draw tally with 20 KOs.

After the fight, Toyoshima said, ‘’I studied the hard-hitting Beppu’s punching angle during the training, and it worked out well. Since many superstar boxers in the world gather in this division (welterweight) like major-league (in baseball), I have to train more and create a new path as time goes by.’’