A-SIGN Boxing, a crowd-funding promotion entity via YouTube, led by Yokohama Hikari Boxing Gym head Ichitaro Ishii will launch a new project, in which the gym will have its two medium-weight boxers fight with their respective Mexican boxers in Mexico on Aug. 20 (Aug. 21 Japan time) in cooperation with local MX Promotions. 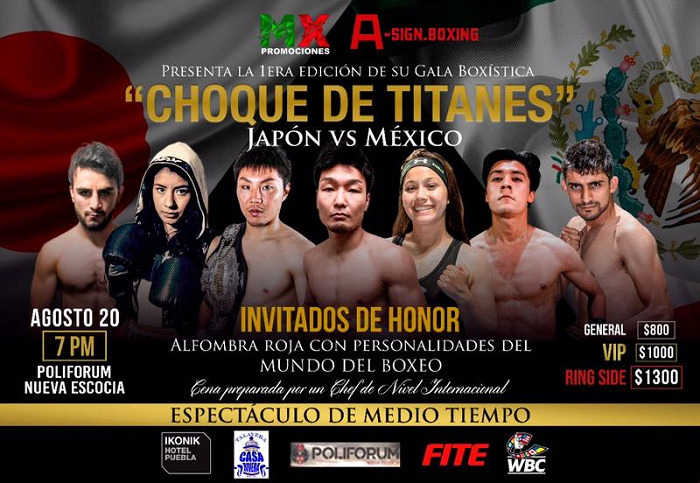 According to the entity, Shoki Sakai, the sixth-ranked Japanese welterweight, will face Dario Ferman in a 10-round nontitle bout at the 67.5 kg. (148.8 lb.) catchweight as the main event under the scare-headline ‘’the Clash of the Titans’’ at the Poliforum Nuva Escocia, which is a bullfighting arena, in Puebla, southern Mexico.

The 30-year-old Sakai, who made his professional debut in Mexico and fought mostly in the country until very recently, has a record of 25 wins, including 13 knockouts, against 12 losses and two draws. For his part, the 37-year-old Ferman has an 18-9 win-loss tally with 15 KOs.

Also, Japanese super welterweight champion Hironobu Matsunaga, 33, will face Gustavo Garibaye in an eight-round nontitle fight at the 70.4 kg. (155.2 lb.) catchweight. Matsunaga has a record of 18 wins, including 11 KOs, against a loss, while the 41-year-old Garibay has a 16-14-2 win-loss-draw record with eight KOs.

A-SIGN said it plans to further expand its overseas bouts once the ongoing novel coronavirus outbreak is over.