‘Monster’ Inoue to defend WBA ‘super’ and IBF titles against Thai boxer on Dec. 14 in Japan 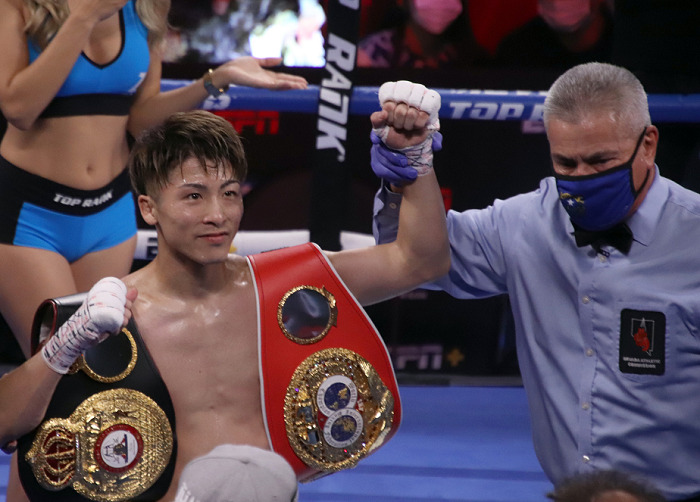 It will be the undefeated Inoue’s sixth defense of the WBA title and his fourth of the IBF crown. His manager Hideyuki Ohashi said the WBA title will also be at stake although the Thai is not ranked by the WBA at this point in time.

It will be Inoue’s first fight since stopping Michael Dasmarinas of the Philippines in June this year to retain the titles in the United States’ Las Vegas. Before that, he knocked out Jason Moloney of Australia to defend the titles in October 2020 also in Las Vegas.

It will thus be Inoue’s first bout in Japan since decisioning Nonito Donaire of the Philippines in November 2019 in the final of the World Boxing Super Series at Saitama Super Arena, north of Tokyo.

Inoue, 28, said, ‘’I will train myself by rejoicing in the fact that I can fight in Japan for the first time in a long time. I am also motivated by the fact that I can have a title unification fight (with a world champion of another sanctioning body) next spring.’’ Inoue has 21 straight wins, including 18 KOs.

The 30-year-old Dipaenon fought at Tokyo’s Korakuen Hall in June 2019 by stopping Ryohei Arakawa of Nakano Saito Boxing Gym in the second round in a super flyweight six-rounder and cracked the IBF world rankings by beating compatriot Sukpraserd Ponpitak for the IBF’s Pan Pacific title. He has a 12-2 win-loss tally with 11 KOs.

Ohashi said, ‘’He is an aggressing type and has a hard punch as his record shows. Anything can happen in boxing. I think the fight will be a thrilling one, adding his fighting style is similar to that of Inoue’s sparring partner Toshiya Ishii of REBOOT.IBA Boxing Gym.’’

In this connection, Inoue said, ‘’I haven’t watched his video yet. But I will not get careless and be ready for the fight.’’

According to Ohashi, agreement with Rau’shee Warren of the U.S., a former WBA ‘’super’’ bantamweight champion and currently No. 1-ranked contender, and with other higher-ranked boxers had not been reached on the terms of the fight with Inoue. It is under such circumstances Dipaenon, who showed intention to challenge Inoue from the beginning, was picked.