World Boxing Association super and International Boxing Federation bantamweight champion Naoya ‘’Monster’’ Inoue, now in Las Vegas, NV to defend his titles against top-ranked World Boxing Organization bantamweight Jason Moloney of Australia here on Oct. 31 (Nov. 1 Japan time), appeared relaxed despite his fight with Moloney at the MGM Grand is only about a week away, his younger brother Takuma and cousin Koki Inoue said on Oct. 24.. 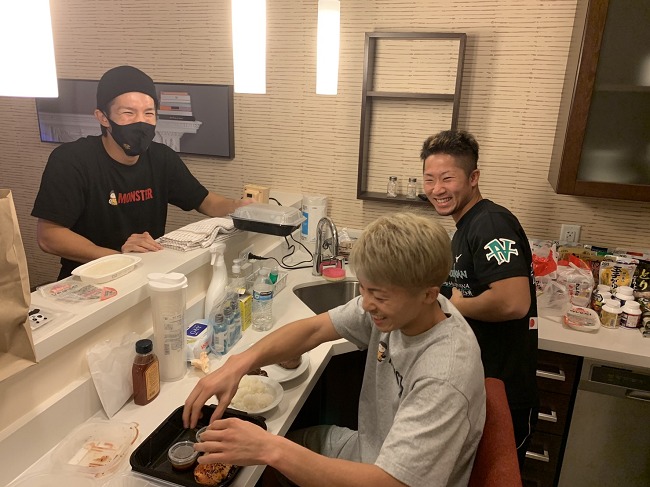 According to Takuma, a former World Boxing Council bantamweight interim champion who has been serving as a sparring partner for Naoya at Top Rank Boxing Gym, The Monster has been in good shape physically and mentally ever since they entered Las Vegas on Oct. 18.
‘’At a hotel room, we have been playing a game, relaxing and enjoy watching comic videos. As for dinner, we have been eating together among the three.’’

According to the planned schedule, Naoya will enter MGM Grand four days before the fight, and there will be no contact allowed with the outside world as part of the measures to avoid the novel coronavirus infection.

The scheduled 12-rounder will take place at the MGM Grand Conference Center without the public present to avoid COVID-19.

Inoue, 27, is undefeated in his 19 bouts, including 16 knockouts, while the 29-year-old Moloney, who hails from Mitcham near Melbourne, Victoria, has a 21-1 win-loss record with 18 KOs. He is currently ranked second by the WBA and fourth by the IBF. Photo by Ohashi Boxing Gym