World Boxing Association super and International Boxing Federation bantamweight champion Naoya ‘’Monster’’ Inoue knocked out challenger Jason Moloney of Australia in the seventh round to retain his title on Oct. 31 (Nov. 1 Japan time) at the MGM Grand Las Vegas, Nevada of the United States.
It was Inoue’s fourth successful defense of the WBA title and second of the IBF crown. 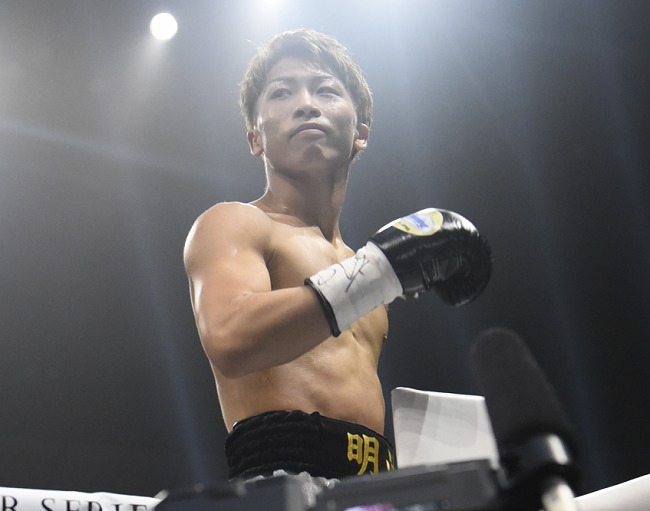 The end of the scheduled 12-rounder at the MGM Grand Conference Center, dubbed ‘’ the bubble,’’ came 2 minutes and 59 seconds into the round when Inoue landed a counter right straight to the head, sending Moloney crashing down to the canvas.

While the game challenger attempted to rise as the referee started the count, the damage of Moloney was such that he fell flat on his back and could not stand even when the referee’s count reached 10.

Inoue, who improved his unbeaten record to 20 wins, including 17 knockouts, also scored a knockdown in the sixth round with a left-hook counter to the head. Moloney, ranked second by the WBA and fourth by the IBF, impaired to a 21-2 win-loss record with 18KOs.

It was the 27-year-old Inoue’s first fight since decisioning Nonito Donaire of the Philippines in the World Boxing Super Series bantamweight final in November last year in Japan. Moloney is also ranked first by the World Boxing Organization.

After the fight, Inoue said, ‘’I was able to enter the ring with good condition but was a little bit nervous at first since I was fighting in Las Vegas. I went on the attack at first. But he (Moloney) moved swiftly and utilized upper part of his body a lot. It was difficult to land my punches. So, I tried to aim at landing counter punches from around the middle of the fight. Both punches that I landed to score knockdowns were the punches I was toning up during my training. I trained to throw double jab and it worked welll.’’

Inoue continued, ‘’But I felt strange in my legs just like I did with my bout with Donaire. That is something I have to correct. My old injury of the orbital floor fracture (suffered in the Donaire fight) had no effect on the fight since it has been completely healed. Although the bout was held behind closed doors (to avoid the novel coronavirus infection), it did not affect me once the fight started.’’

He went on, ‘’ Since I was able to come through in my first fight in Las Vegas, I would like to aim at facing the champions of the World Boxing Council (Nordine Oubaali of France) or the WBO (John Riel Casimero of the Philippines)’’

The Inoue-Moloney fight and other undercard bouts at the MGM Grand took place without the public present as part of the measures to avoid the COVID-19.